Texas Rep. Pfluger Worries About the Increasing Migrants in Del Rio; Officers Describe the Situation as "Out of Control"

Rep. August Pfluger said on Saturday while visiting the migrant surge's staging area in Del Rio, Texas, claiming that the number of mostly Haitian migrants camped there in filthy circumstances had surpassed 15,000 and that the situation may become much worse. 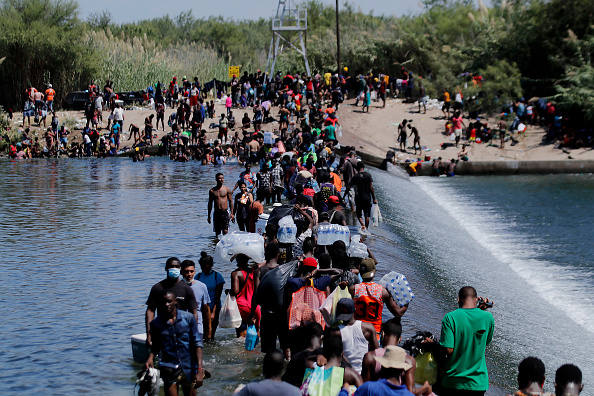 Texas Rep. Pfluger Said 'The Worst is Yet To Come'

In a recently published article in FOX News, Texas Rep. Pfluger said that he spoke to the Border Patrol Officials, and they are worried about what is behind there and their coordination with Mexico. He even said that the 'worst is yet to come or more migrants might come.

Pfluger is one of several legislators who claim that the crisis was precipitated partly by the Biden administration's decision to stop deportation flights and that Haitians and others waiting in Central America mistook this as permission to enter the United States.

He said, "So when those flights were stopped by the U.S. government they got the word and it was like 'go time,'" Additionally, the Texas Republican also said that there had been allegations of criminal behavior, as well as prostitution and narcotics. He is concerned about possible security issues, according to a report published in Ground News.

Border Officials Worry About the Increase of Migrants

On Saturday, the Department of Homeland Security announced that more agents and staff would be arriving soon, as well as an increase in deportation flights in the coming days while emphasizing that the country's borders are not open and that most migrants would be deported under Title 42 public health protections.

Meanwhile, the US Customs and Border Protection has shut down the port of entry at Del Rio, redirecting lawful commerce and travel 57 miles to Eagle Pass, as well as border checkpoints to screen for illegal immigrants and illicit goods, according to a published report in CNBC,

As their numbers grow as they wait to be processed by Border Patrol, the migrants have built up a de facto camp beneath the bridge to escape the 100-degree heat. To assist, officials rushed toilets, water, medical supplies, and other humanitarian items.

Critics have pointed to the extension of Temporary Protected Status (TPS) for Haitians already in the United States, as well as a broader effort by the Biden administration to rollback Trump-era border protections like border wall construction and the Migrant Protection Protocols, in addition to the reported halting of deportation flights, which DHS has now resumed.

Since assuming office, the government has faced a spike in migration, which peaked at more than 200,000 interactions each month in July and August. The government has blamed "root factors" like violence, poverty, and corruption, as well as Biden's administration's decision to terminate legitimate asylum routes.

Despite this, he complimented the hardworking Border Patrol officers but seemed irritated as he explained how the situation might have been avoided if the government had taken action.