According to a new research published in the journal Science Advances on Friday, wildfire smoke may have caused thousands of COVID-19 cases and fatalities in the West last year. 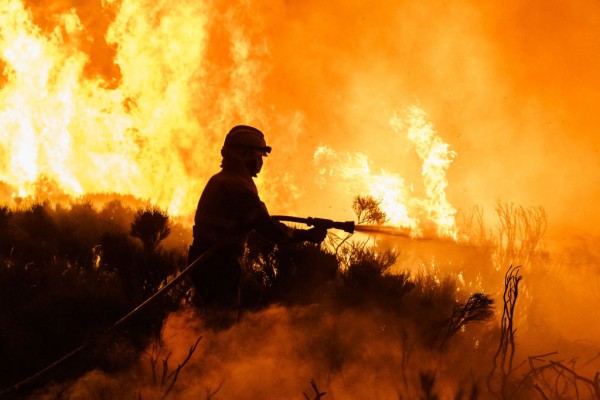 (Photo : CESAR MANSO/AFP via Getty Images)
Firefighters operate at the site of a wildfire between Navalacruz and Riofrio near Avila, central Spain.

In a recently published article in MSN News, from March to December 2020, Harvard University researchers examined data from 92 counties in California, Oregon, and Washington and found "strong evidence" that short-term exposure to fine particulate matter from wildfires increased COVID-19 cases and fatalities.

The authors discovered that almost 20 percent of COVID-19 cases were related to a rise in wildfire smoke in several of the counties, all of which were affected by wildfires. Smoke was related to an even greater proportion of fatalities in certain areas.

Wildfires are known to generate significant amounts of pollution that are potentially detrimental to human health, and previous research has connected air pollution to more severe COVID-19 symptoms. Air pollution may exacerbate COVID-19 symptoms while also increasing transmission, according to a published article in The Washington Post.

Why Is Wildfire Smoke Linked to COVID-19?

In a published article in National Geographic, thousands of different chemicals may be found in wildfire smoke, but particulate matter measuring 2.5 micrometers in diameter (PM2.5) is one of the most common. PM2.5 is a well-known health hazard, and the Environmental Protection Agency (EPA) carefully monitors it, giving adequate data to evaluate its population effect.

While traffic and industry-related PM2.5 emissions have decreased in recent years in the United States, wildfire smoke has become a significant source. According to a new study, smoke may account for almost half of particle pollution in the West and a quarter of national levels when it sweeps across the country during a wildfire.

Scientists are still discovering the entire degree to which wildfires may endanger human health, but the preliminary study indicates that the smoke is potentially more hazardous than previously thought. However, it is unknown how smoke from this year's fires in California, the Pacific Northwest, and Canada may impact COVID-19 incidence rates, especially if the pandemic's deadlier and more infectious Delta form resurfaces.

PM2.5 creates difficulties in two ways when it enters your body. "It gunks up your upper respiratory system," explains Sarah Henderson, scientific director of environmental health services at the British Columbia Centre for Disease Control.

Certain cells in the body contain little hairs that, like the legs of a caterpillar, are continuously pushing intruders up and out via mucus. Henderson said, "That's why you have to blow your nose," according to a published article in the Seattle Times.

Second, wildfire smoke confuses your immune system, according to Henderson. Unlike bigger particles of particulate matter, PM2.5 is tiny enough to penetrate deep into the lungs of humans, triggering an immunological response. The body becomes susceptible when the immune system is overworked, and the COVID-19 virus is more likely to cause illness.

Individually, the best approach to protect oneself is to be vaccinated, wear masks that protect against viruses as well as PM2.5, use air filters at home, or evacuate if there is excessive smoke pollution.