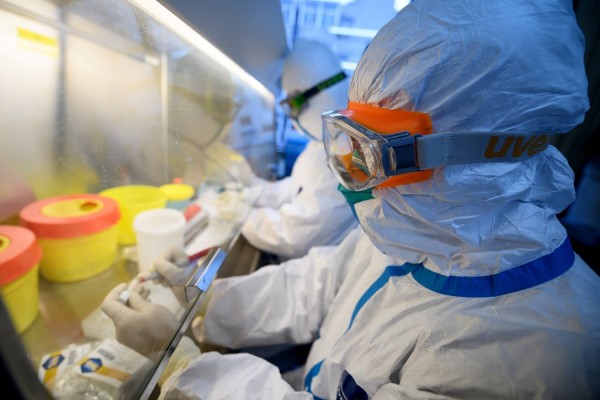 (Photo : cnsphoto via REUTERS )
Workers in protective suits conduct RNA tests on specimens inside a laboratory at a centre for disease control and prevention, as the country is hit by an outbreak of the novel coronavirus, in Taiyuan, Shanxi province, China February 14, 2020. Picture taken February 14, 2020.

Cases of coronavirus continue to overwhelm governments and health care workers worldwide, as the disease run riot across nations and continent, a professor from National Taiwan University (NTU) claimed that the virus which causes the dreaded COVID-19 is more than likely man-made basing on its unusual structure, Saturday.

In a seminar on the 2019 novel coronavirus which was hosted by the Public Health Association of Taiwan at NTU, Professor Fang Chi-tai of the university's College of Public Health addressed the spreading theories that the virus which has infected tens of thousands of people somehow leaked or was released from the Biosafety Level 4 Laboratory (BSL-4 Lab) of the Wuhan Institute of Virology.

According to the professor, what he knows for sure is that the research laboratory houses many deadly viruses to study in the facility like Severe Acute Respiratory Syndrome (SARS) which plagued China in 2003 and Ebola. He also added that given China's questionable track record with laboratory management and safety standards, such occurrence is not impossible.

Furthermore, he said that the 2019 nCoV strain is similar to the bat virus RaTG13 by 96% and that the laboratory is known to have that virus in their facility. However, he said that this is not sufficient evidence since the viruses need to be 99% similar to be declared as the same.

In addition, Fang noted that a French Team investigation COVID-19 has discovered the key difference between RatG13 and the novel coronavirus, stating that the latter has four additional amino acids that cannot be found in other strains of coronavirus. Fang further noted that these amino acids make the disease more transmittable.

Read also:  US and Korean Military Training Under Review Amidst Coronavirus

On top of that, the French team's findings had led to speculations in the scientific community that Chinese scientists who were growing the virus thought that the SARS outbreak was easy to deal with, thus developing an "upgraded version", Fang stated in his claims. He also said that the upgrade is theoretically possible through the help of modern technology.

Moreover, the professor stated that normally, viruses only exhibit minimal mutations, through singular changes in natural conditions. Hence, he asserted that it is very unlikely for a virus to have four amino acids added at once.

To conclude his theory, Fang said that in the academic point of view, there is indeed a possibility that the additional amino acids were added by humans in a laboratory to RatG13 creating the current strain of coronavirus. He also said that it is also still possible for the phenomenon to occur naturally but the chances are very slim. He stressed that the mutations in the novel coronavirus are very unusual in the academic sense, hence, the possibility that it is man-made.

On the positive side of this, Fang said that if the virus is indeed created in a petri dish, it means that it does not naturally occur in our ecosystem. Thus, if the last patient is cured there is a minimal chance that the virus will resurface.

However, a theory similar to Fang's has already been refuted by a Taiwanese-American professor Ching Lin, in early February. The theory that circulated alleged that the virus was a bio-weapon created by the United States,also suggesting that the amino acid growth were impossible. Ling said that these are all conspiracy theories and that the insertion of four amino acids in COVID-19 is not unusual in the results for the algorithm for comparing primary biological sequence information, pBLAST.