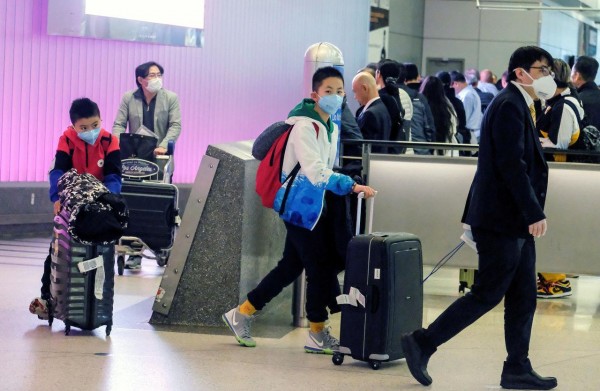 (Photo : REUTERS/Ringo Chiu/File Photo)
FILE PHOTO: Passengers arrive at LAX from Shanghai, China, after a positive case of the coronavirus was announced in the Orange County suburb of Los Angeles, California, U.S., January 26, 2020.

The 2019 novel coronavirus has been spreading like wildfire with more than 76,000 people infected and 2,200 deaths recorded. In view of this, United States officials announced on Friday that they are already making preparations in response to the possibility of a COVID-19 pandemic through U.S. communities which may lead to force the closure of schools and businesses.

According to CNN, there are now 35 confirmed cases of the virus in the United States, including 18 former passengers of the cruise ship Diamond Princess which encountered the virus while at sea.

Centers for Disease Control and Prevention official Nancy Messonnier told reporters on a conference call that health authorities are now preparing medical personnel for the risk of an outbreak of the disease that first emerged in Wuhan City in Hubei Province, China.

Furthermore, Messonnier added that if the virus begins to spread in the U.S., health authorities want to be ready for possible adoption of schools and business closures like what was done in other Asian countries' efforts to control the disease. She also said that even if the country is yet to witness the spread of the virus, it is very likely that it will happen.

Messonnier also explained that the main goal of the CDC is to slow down the introduction of the virus into the country in order to buy more time for preparation. The organization has already taken steps to ensure US health workers in the frontline would have the needed supplies and protection. They already had discussions with businesses, pharmacies, hospitals, and provisions manufacturers and distributors on everything needed to battle the disease.

The preparations that the US is taking is in response to the warning of the World Health Organization (WHO) that the window of opportunity to contain the spread of the killer virus is already closing since it has already spread to as much as 26 countries, including the spike of cases in South Korea and more recently outbreaks have been observed in Iran, Italy and Lebanon.

In a statement released in Geneva, WHO Director-General Tedros Adhanom Ghebreyesus said that if we do well, any crisis can be averted, but if we squander the opportunity to do so, then a serious problem is in our hands.

The U.S. already has 14 cases of people diagnosed with the virus within the country and another 21 cases amongst the Americans who returned to the country from Wuhan and the Diamond Princess as reported by Reuters.

There were 329 Americans that were evacuated from the cruise ship and 18 of them tested positive. Eleven of those who are positive for the virus are currently confined at the University of Nebraska Medical Center, five are quarantined in medical facilities near the Travis Air Force Base and two are in San Antonio, Texas near Lackland Air Force Base.

As of the moment, there are only three U.S. states that have the capacity to run tests for the virus locally according to the Association of Public Health Laboratories.