As the COVID-19 vaccine deadline approaches, New York Municipal firemen and other city employees protested outside the mayor's mansion on Thursday. 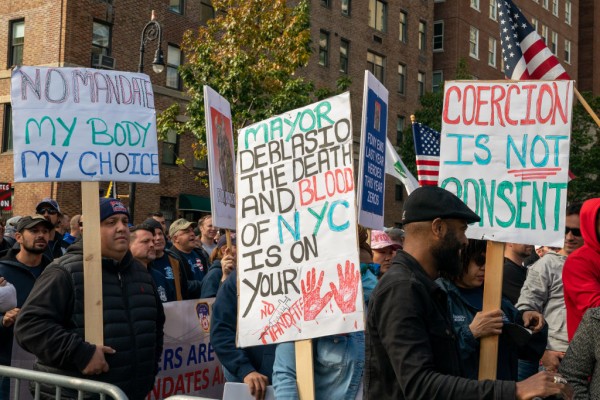 In a recently published article in MSN News, Police officers, sanitation workers, and firemen, for example, have until 5 p.m. Friday to show confirmation of obtaining at least one dose of vaccination. This is as the City Mayor continues to reinforce the vaccine mandate among his employees.

Those who refuse to be vaccinated will be put on unpaid leave for at least 30 days beginning Monday, and their future work will be determined via individual labor union discussions. Officers in uniform have until December 1 to provide evidence of vaccination.

The anti-vaccine mandate event was organized by the city's firemen unions on Thursday, and it took up the whole street in front of Gracie Mansion, where Mayor Bill de Blasio lives. Municipal workers, including members of the FDNY union, and others assembled, some carrying posters that read "My body, my choice" and "Coercion is not consent," according to a report published in ABC News.

Thousands of vital workers, including police officers, firemen, and sanitation workers, might be put on unpaid leave beginning Monday when the city's broad requirement mandating practically all municipal workers to obtain at least one dosage of a coronavirus vaccination goes into effect.

As of Thursday morning, just over one-third of the Fire and Sanitation Department employees, as well as one-quarter of the police force, had yet to show proof of vaccination. As a result, city agencies were putting in place a variety of contingency plans, including mandating overtime for vaccinated employees and canceling vacations to fill staffing gaps, according to a report published in The New York Times.

Meanwhile, Mayor Bill de Blasio, a Democrat in his second term who imposed the requirement, predicted on Thursday that many municipal workers will be given shots at the last minute, as occurred shortly before similar regulations for health care workers and school employees went into force in recent months.

President of the Uniformed Firefighters Association of Greater New York, Andrew Ansbro, had told reporters that many of the union's members were still undecided. The head of the Uniformed Fire Officers Association, James McCarthy, has also claimed that the Oct. 20 deadline is insufficient time to make a retirement decision if you are going to resign from this profession.

In a published article in FOX11, If approximately 3,500 firemen who are presently unvaccinated are unable to report to work, Ansbro has warned of a "catastrophic personnel crisis." According to the FDNY, 65 percent of its members have been vaccinated,

However, De Blasio added that the city's fire, police, and sanitation departments are "confident" in their contingency preparations and that the city had expected that a lot of the vaccines would happen towards the end of the deadline.