China and Russia held their first-ever military exercise on October 17-23 in the Western part of the Pacific Ocean. 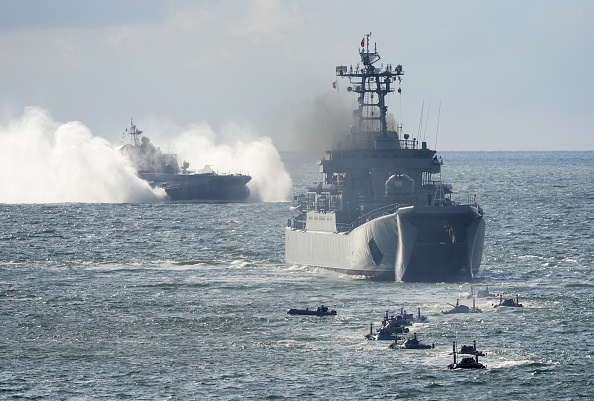 (Photo : Vitaly Nevar\TASS via Getty Images)
BTR-80 amphibious armoured personnel carriers released from the Minsk large landing ship during an amphibious landing exercise held by naval infantry units of the Russian Baltic and Northern Fleets, in the Baltic Sea; over 70 items of military hardware and more than 500 naval infantry officers are taking part in the drill..

In a recently published article in MSN News, both giant countries have showcased their military warships during the joint patrol. There were a total of 10 warships during the drill, five from each country that lasted for a week, and it covered 1,700 nautical miles.

In a statement released, it said that the main objective and goal of the joint military drill is to "demonstrate the flags of Russia and China," It also added that it promotes peace and stability in the Asia-Pacific area, as well as defend the marine commercial activities of both nations.

During the patrol, China and Russia's warships made their maiden passage through the Tsugaru Strait. The Tsugaru strait connects the Sea of Japan to the Pacific Ocean. It is located between the Japanese islands of Honshu and Hokkaido in the northern region of the nation, according to a published report in Reuters.

The two nations have a long-standing military relationship. They have participated in several joint military exercises, the most high-profile of which being "Vostok 2018," a simulated war in which a Russian-Chinese alliance battled a fake adversary.

In a published article in Sky News, according to a statement released by China's military ministry, Russia and China re-united in August to employ a combined command and control system, with Russian soldiers incorporated into Chinese formations.

President Xi Jinping of China is a close ally of Russian President Vladimir Putin. In June, Chinese foreign ministry spokeswoman Zhao Lijian said that the two nations were "linked like a mountain" and had an "unbreakable" bond.

Military Ties of Russia, China is a Challenge for Biden Administration

Deepening military and diplomatic collaboration between Russia and China are causing concern among US defense strategists, who are concerned that the two adversaries, who share military technology and many foreign-policy objectives, could impede the Biden administration's ambition to reclaim US leadership.

With an eye on its own pressure campaign on Taiwan and the South China Sea, China is closely following Russia's military buildup along the Ukrainian border, which the US Defense Department reported this week is greater than the 2014 deployment, according to a published article in Foreign Policy.

Meanwhile, according to 11 current and former officials and experts who talked to Foreign Policy, there is no proof that Beijing and Moscow are indeed coordinating their rival pressure efforts.

The Biden administration focuses on completing the long-delayed pivot to Asia by deploying more military assets to the Western Pacific. However, it is still grappling with how to manage Beijing's growing axis with Moscow, which, according to a 2019 US intelligence assessment, is more aligned than at any time in the previous 60 years. Chinese President Xi Jinping previously called Russian President Vladimir Putin as his "best buddy and colleague."