Thousands of protesters marched down Rome's famed Via Veneto and other streets on Saturday, breaking their way into a union office and fighting with police in a show of opposition to Italy's new "Green Pass" vaccination requirement for workers to access their workplaces. 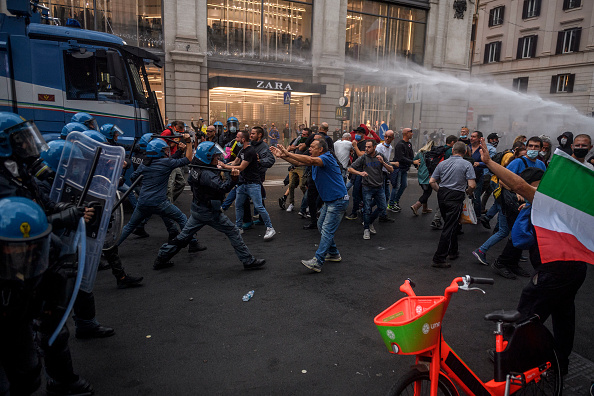 (Photo : Antonio Masiello/Getty Images)
Demonstrators clash with the Italian Police during a demonstration organized by No Green Pass, No Vax and far-right movements against the Green Pass, following the new decree outlined by Italian Government, near Palazzo Chigi.

In a recently published article in MSN News, beginning October 15, certification will be required in both public and private employment. Noncompliance may result in penalties for both workers and employers. If a public employee fails to show up five times without a Green Card, they may be fired.

In Italy, the pass is a requirement to access museums, theaters, gyms, and indoor restaurants, as well as to travel large distances by rail or bus or to fly domestically. Additionally, The passes indicate that a person has received at least one dose of COVID-19 vaccination, has recovered from the virus in the last six months, or has tested negative in the previous 48 hours.

Thousands Protest Against the Vaccine Mandate

The protestors began with a loud, legal demonstration in Rome's Piazza Del Popolo on Saturday. Then, in an illegal march, they exited the huge plaza and fought with police as they marched through Villa Borghese Park and along the Via Veneto, according to a published article in US News.

A small group of protestors split off and proceeded along a street in Rome's ancient central retail area, which leads to Premier Mario Draghi's office in Chigi Palace. The police established a line supported by police vehicles and sprayed water to prevent access to the Italian government's seat.

According to a published article in Associated Press, the police wielded batons at several protesters. As they faced up with police on the front lines outside of Chigi Palace, several protestors raised their arms in a nonviolent gesture. Others screamed "Freedom!" while raising clenched fists or waving Italian flags. "Get your hands off (our) job," said one placard.

Some Protesters Armed with Metals and Sticks

According to Rai State TV, in a published article in Detroit News, Demonstrators numbered at least 10,000, but organizers claimed 100,000. According to RAI, at least one demonstrator was wounded. Proponents of the extreme right-wing party Forza Nuova were among the protestors.

Some demonstrators forced their way into the offices of CGIL, a left-leaning union, and destroyed its office with sticks and metal bars. The Green Pass requirement has been backed by Italy's major labor federations to keep factories and other workplaces safe during the epidemic, which has wreaked havoc on the Italian economy.

In a statement, Draghi said that the freedom to express oneself must never devolve into acts of violence or intimidation. He called any kind of harassment against unions, which he characterized as "a basic bulwark of democracy," intolerable.

Draghi's administration has attributed a recent increase in vaccinations to the Green Pass requirement for businesses. As of Saturday, 80 percent of Italians aged 12 and above who were eligible for a COVID-19 vaccination injection had received one.