Taliban's Sharia Law: Barbers Not Allowed To Shave Men's Beards and To Play Music in their Shops

Barbers in Helmand Province, Afghanistan, are no longer allowed to shave men's beards or play music in their shops, according to a statement released by the province's Taliban-led virtue and vice department. 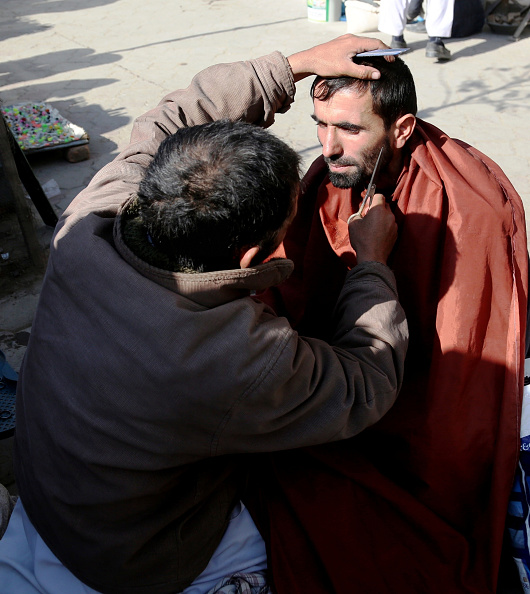 (Photo : Xinhua/Rahmat Alizadah via Getty Images)
An Afghan barber trims a customer's beard in a street in Kabul, capital of Afghanistan.

New Regulations Under the Taliban Rule

The new rules are the most recent in a long line of limitations imposed on Afghans based on the Taliban's rigid interpretation of Islamic Sharia law. Taliban interim government has been implementing different restrictions and policies that somehow reflect their group in the 1990s, as per CNN News.

The local authority said on Sunday that shaving beards and playing music in barbershops and public baths are now absolutely banned, effective immediately. If it is discovered that a barbershop or public bath has shaved someone's beard or played music, they will be dealt with according to Sharia rules, and they will not have the right to protest.

Meanwhile, the Taliban did not specify what will be the corresponding sanctions and punishments if this new regulation will be violated. It can be remembered that one of the founders of the Taliban said that execution and amputation will be returned in Afghanistan, according to a published article in MSN News.

Read Also: Taliban Members Bring Four Bodies of Alleged Kidnappers to the Main Square, Militia Group Hang One of Them

While the Taliban have stated that their rule will be more moderate than their previous administration, there have been numerous reports of harsh crackdowns since they seized power in August, including the detention and assault of journalists, the use of whips against women protesting, and the public hanging of alleged criminals.

Despite promises that female students will be permitted to study, the organization has not allowed Afghan girls and women to continue secondary school. Afghan youngsters have already been summoned to attend classes, according to a published report in KESQ.

The Taliban prohibited women and girls from attending school and employment, as well as severely restricting their rights, while they were in control from 1996 to 2001. Women have been entirely excluded from the country's new, conservative administration and have been forced to quit their jobs in certain cases.

What is Sharia Law?

The legal system of Islam is known as Sharia. It is based on the Quran, Islam's sacred book, as well as the Sunnah and Hadith, the Prophet Muhammad's actions and sayings. Religious experts may provide judgments as advice on a specific subject or question if a solution cannot be found immediately from these.

In a published article in BBC News, Sharia literally translates to "the clear, well-trodden road to water" in Arabic. Sharia is a rule of conduct that all Muslims should follow, including prayers, fasting, and charitable contributions to the needy. Its goal is to assist Muslims to comprehend how to conduct their lives in accordance with God's desires in every way.

Sharia is primarily a rule of ethical behavior, as well as a code of worship and charity, according to Islamic thinkers, but it also addresses criminality. In Sharia law, crimes are divided into two categories: "hadd" offenses, which are severe crimes with fixed punishments, and "tazir" offenses, which are less serious crimes with the judge's discretion.

Some nations that apply Islamic law impose or enforce such punishments for hadd offenses, and studies show that Muslim opinions about severe punishments for such offenses vary greatly.

Theft is one of the Hadd offenses that, in the harshest interpretations of Sharia, may result in the offender's hand being amputated. In the implementation of hadd punishments, there are many protections and a high bar of evidence. However, experts claim that this seldom occurs in reality.