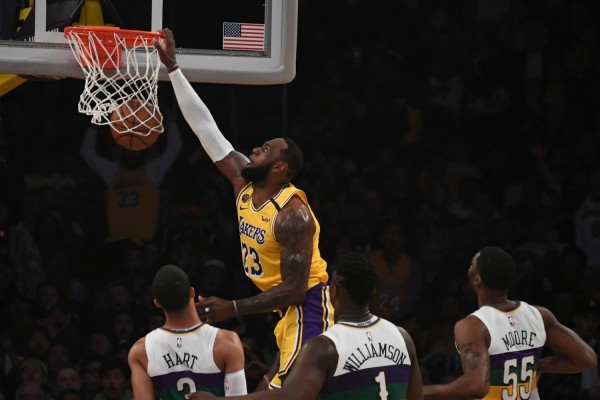 LOS ANGELES - Reminding everyone that he is still The King, LeBron James posted a season-high 40 points and orchestrated the LakeShow in the most awaited match up with Pelicans' Zion Williamson as the Lakers stunned the Pelicans in their sixth straight win, 118-109, Tuesday.

Despite the 63 combined points of Williamson and Ingram, the Pelicans fell short in the hands of the Lakers' as The King fires back in every run that they are throwing and managed to run away with the W.

Coming from Lebron's kick-out pass Danny Green drills the shot from downtown to open the quarter and to start the take over early in the game establishing an 11 point lead (17-6) with six minutes remaining in the opening quarter, but the Pelicans rallied back with a run of their own as they close the gap to 26-30 ending the quarter with a buzzer-beater coming pull up from Brandon Ingram.

A strong start from the Pelicans in the 2nd frame led by Jrue Holiday gave their first taste of the lead but the Lakers' kept the game close as Lebron slams a monstrous jam in the open lane with 7:40 time remaining the 2nd quarter,42-39.

With Kuzma and Anthony Davis in the court, The Lakers' were able to see the hole in the zone defense as they abuse the Pelicans and slides in the heart of the defense converting and ones establishing a 7-20 run. But the Pelicans marched they way back to the game as Zion bullies the Lakers' in the paint and skies for an alley-oop from former Lakers star Lonzo Ball. With 33 seconds remaining in the quarter, LeBron sneaks in for a foul counted closing the half for the Lakers', 64-58.

Lonzo launches a three to open the second half but LeBron with 9:17 in the 3rd quarter Lebron takes over establishing an 11-0 run against New Orleans and "The King" made Zion dance as he steps back for a shot in the arc,77-66.

The Pelicans hangs with the Lakers' and slowly sneaks in to get the lead as they find a way to get the lead with their pocket passess in the paint. At 3:50 time remaining, the Pelicans taste their first lead in the second half coming from Jrue Holiday's pocket pass resulting to Derrick Favors' dunk but with a tied game and the time whining down Lakers' Kentavious Caldwell-Pope scoops in a layup to get the lead at the end of the 3rd quarter, 88-86.

Lakers' bench King's Men took charge and with 9 minutes remaining, CaruShow"made a rim denial and a possible 'block of the year' after swatting Lonzo Ball in the air and outperforms JJ Redick in the open court for an and-one.

With the win, The Lakers' is currently in the Western conference throne with a 44-12 standing while the Pelicans are in 10th spot with 25-33 record just three games behind the currently 8th seed Memphis Grizzlies in the Western Conference.