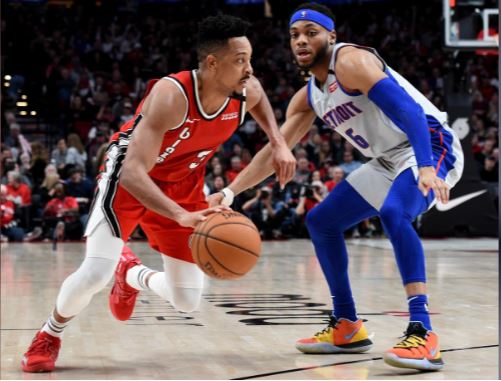 Amid the absence of Damian Lillard after sustaining an injury, the Portland Trail Blazers managed to steal a win over the Detroit Pistons at the Moda Center, 107-104, ending their three-game losing streak, Sunday.

With no "Dame Time" to rely on, CJ McCollum took the spotlight posting a double-double with a season-high 41 points and a career high 12 assists. He also posted nine boards that night.

Blazers forward and basketball veteran Carmelo Anthony was also all praises for the 28 year-old guard saying McCollum led the team and came up big when the team needed it. He also said that McCollum mad the right plays with all of his shots falling, he carried the whole Blazers squad on his back.

With the big comeback, Blazers are still hoping for a play-off spot currently ranking ninth on the Western Conference with a 26-32 record only three-game behind the Memphis Grizzlies and ahead of the tenth place New Orleans Pelicans by only half a game. The Blazers only have 24 games to play in the regular season.

In Sunday's game, by the end of the third quarter, McCollum was able to sink a shot from the rainbow territory which cut down the Piston's advantage to five as they entered the fourth quarter after struggling to bank shots in the previous quarters.

McCollum scored 13 of his 41 points in the fourth quarter which led his team to take home the W.

Terry Stotts, coach of the Blazers was also amazed at McCollum's performance last Sunday saying how his performance was outstanding. He praised how impressive McCollum's game was posting back-to-back double-digit assists and scoring well, lifting his team up in the absence of Lillard.

However, despite the shooting barrage that McCollum showed the Pistons were in the game until the final seconds. With 21.3 seconds left, sank a jumper giving Portland a four-point lead but Christina Wood of the Pistons pulled a three-pointer which cut the lead with only 5.5 seconds left.

In the last 2.1 seconds, the Pistons had ball possession but Grant Trent Jr. was able to get a steal and sealed the win for his team.

Aside from McCollum, Anthony was also able to post his season-high in points after finishing with 32 points on Sunday.

Analysts have predicted that even in the absence of their main guy, Lillard, the Blazers were going to get an easy win against the Pistons who are still in the middle of a team rebuild. This was because the Pistons traded Andre Drummond to the Cleveland Cavaliers and bought out contracts of Reggie Jackson and Markieff Morris. And it seemed that the analysts were right only in the first parts of the game when the Blazers ended the first quarter with a 19 point advantage.

However, during the rest of the night, the Blazers were trailing behind the Pistons and it surely was not an easy win but rather an epic comeback.