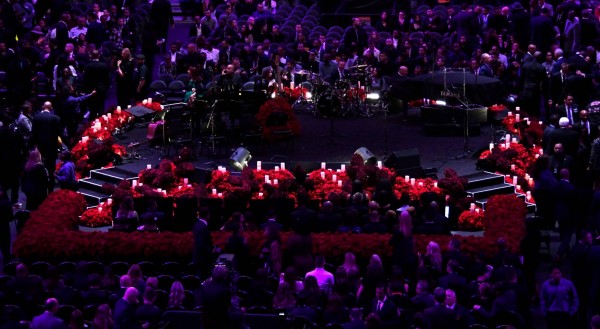 Staple center was flooded by fans, supporters, family and friends of the late NBA Legend Kobe Bryant and his daughter Gianna during the memorial service honoring and remembering the Black Mamba and Mambacita, February 24.

The memorial was held in remembrance of the two, after they fell to their death in the tragic helicopter crash in Calabasas, California, January 26.

The memorial was very emotional as friends and family of Kobe and Gianna went up the podium to speak about their lives and legacy.

Jimmy Kimmel, was the event's emcee, who introduced the speakers and even throwing out some one-liners while trying to fight back tears. He, however, failed as in his opening remarks his voice was already shaking and tears were already streaming down his face.

The event started, with Beyonce who was wearing gold under the purple light as she offered songs to honor Kobe and Gigi amid "The House That Kobe Built." Queen Bey sang her hit song "XO" which she according to her was one of the Black Mamba's favorite songs. She also belted out an emotional rendition of "Halo", pertaining to the angels that Kobe and Gianna have now become.

The event got more emotional as Michael Jordan said his eulogy for his friend and "little brother". Staples Center was filled with applause as MJ talked about how everybody wanted to talk about comparing him and Kobe when all he wanted to do was talk about the late Mamba.

In his speech, the Chicago Bulls and NBA Legend talked about how much he simply wanted to be the best big brother to Kobe as he got to know him when his career was already wrapping p and Kobe was just beginning his. While tears were falling from his eyes, Jordan tried to shift the mood inside the arena saying he will have to look at another meme of his face crying.

Kobe's teammate Shaquille O'Neal also offered a tribute to Kobe, reminiscing memories they have shared on and off the court. Shaq acknowledged that he and Kobe have had differences but said that they will always be brothers.

One of the highlights of his speech was when Shaq looked back on a particular moment when he tried to talk Kobe out of hogging the ball, telling Mamba that there was no "I" in "TEAM", to which Kobe responded that he knew but that there was also "M-E" on that word.

Perhaps, one of the most, if not the most emotional parts of the night was when Kobe's widow Vanessa Bryant took the podium. Vanessa mourned the loss of her daughter whom she referred to as "a sweet and gentle soul", she also added that one of Gigi's dream was to play for the WNBA and if she was not taken too soon she would have been destined for greatness in the Women's basketball league.

Vanessa also shared who Kobe was behind his many names, "Kobe", "Black Mamba", an Oscar winner, one of basketball's greatest of all time, to her Kobe was her soulmate who loved her and her family unconditionally. She also described him as a father who always puts his family first.

Vanessa ended her speech saying Kobe and Gianna could not be on this Earth without each other, that is why God had to bring them home in heaven together.

The memorial ceremony closed with Kobe's Oscar-Winning farewell to the game he loved to play, "Dear Basketball."