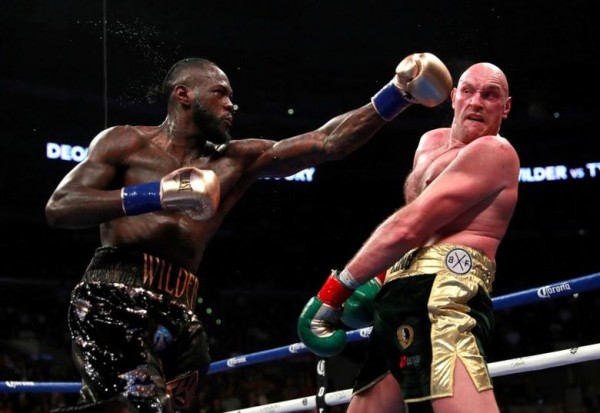 After experiencing first career defeat against Tyson Fury last Sunday, Deontay Wilder will not let any opportunity to get even pass.

According to Fox Sports, Wilder fight Fury for the third time for the WBC heavyweight belt through exercising his rematch clause after blaming his 20 kilogram ring walk costume for weakening his legs during the match.

Wilder said that he wants the rematch to happen this summer with no fights in between. He further added that he is a warrior who is ready to go again but will definitely change a lot of things in their training camp.

He was also mad at both the referee Kenny Bayless, who he claimed allowed his opponent to get away with punches landing at the back of his head; and at his trainer Mark Breland for throwing in the white towel in surrender.

In an interview with Yahoo! Sports, Wilder said that Fury did not hurt him at all only that his uniform was too heavy for him which caused him to lose his legs from the beginning of the match.

He further said that a lot of people were telling him that he looked like something was wrong with him while he was in the ring, but he just bluffed and tried his best to keep endure his legs.

Wilder also stressed that he was upset at Breland because they have talked about this many times beforehand. He said they talked about how this should not get emotional and never throw in the towel no matter how he looked like. He clarified that before Breland threw the towel he still had a fighting chance with still five rounds to go.

Wilder's head coach is still deciding what to do with Breland who made the call to throw the towel, saying both he and Wilder did not want to surrender and stop the fight in the immediate aftermath.

Wilder also told The Athletic that they are still re-evaluating whether or not they would retain Breland since he understands that the man was just looking out for him, yet insisted that it is his life and career thus his wishes needs to be respected.

During his fight with Fury, the 34-year-old boxer dropped twice and believed that Bayless allowed Fury to get away with things that he specifically warned against including the punches at the back of his head. Throwing shade at the referee saying that the rules seemed to only apply to him.

However, Wilder did not only give negative statements but he also gave Fury credit on the victory. He said that he was very happy for Fury and wanted to give him his complete congratulations.

He further added that Fury had the victory in their match was one of the great accomplishments in Fury's career and that he is excited about his career.

Wilder also said that he looks forward to their anticipated rematch and that in the third installation of their trilogy no towels be thrown.