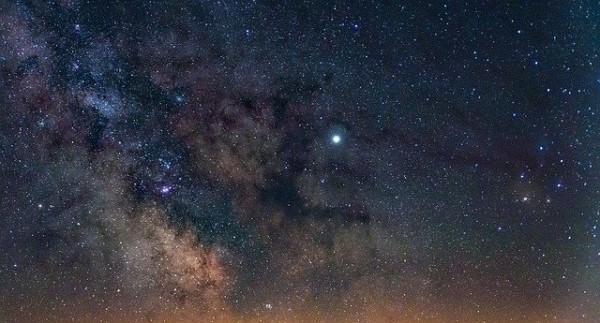 (Photo : Pixabay/ EvgeniT)
On February 23, the start of the conjunct of several celestial bodies, will be seen in NYC. This continues for a few days, not just one night as the moon disappears.

Skywatchers are in for a treat when the moon, three planets and Red Star Antares clustered together over New York City. The cosmic event starts in the pre-dawn and until sunrise if any stargazer is willing to spend time on it. When observing the event, the moon becomes less prominent as the days progress. The lunar cycle will continue until it is blacked out, and it starts on the February 23, Sunday.

One of the participants in this celestial display is the Red star Antares that will be seen in the cosmic phenom in New York City, starting on February 23. This star is about 600-light-years (LYA) away from the Earth located in the Scorpio constellation. Antares is currently burning off whatever hydrogen it has left, and will die in supernovae explosion that will be as bright as the Milky Way galaxy (MWg).

The moon is seen from any point, and it is visible without anything blocking it. When the moon orbits the Earth, the shape changes because of the sun's light. This creates the phases of the moon. Each shape is the orbit of the moon in one month. A lunar cycle is a month, starting with a new moon, and ends with a full moon that lights up the night sky.

Mark it on the calendar because the new moon happens on Sunday on February 23, at 10:32 am EST (1532 GMT), three days into the waning crescent moon. This crescent moon will get close to Saturn. After four days, it will closely pass by Venus. The new moon is the starting phase when the moon is between the sun and Earth. Both Earth and the moon are in conjunction, meaning they are parallel to each other.

At sunrise, 6:43 am local time, both the moon and Saturn will not be so high. But by 6:30 am, Saturn will be hard to see. It will be spotted at 13 degrees above the horizon, to see at arm's length. The conjunction is seen better at the south, with the horizon which is closer to the equator and with an ecliptic angle that is a bit shallow than normal to be able to witness the moon and Saturn almost too close.

On February 27, Venus and the slender crescent off to the leftmost side will be seen at the west-southwest skies during sundown. This is just one of the planets that will line up with the moon and Red Star Antares in the night sky.