Surveillance Robot Patrols the Streets of Tunisia While on Coronavirus Lockdown 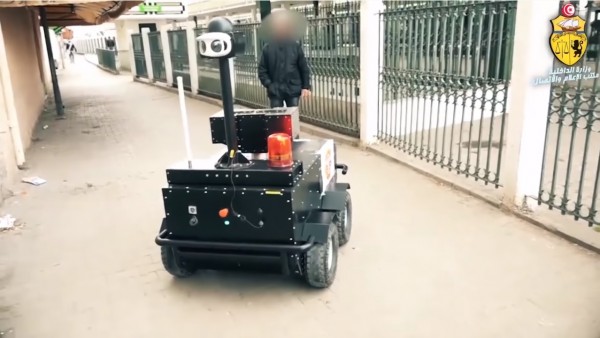 (Photo : Youtube)
The “robocop”, also known as PGuard is remotely operated and equipped with infrared and thermal imaging cameras, in addition to a sound and light alarm system.

Tunisia's interior ministry has sent a police robot to patrol the streets of the capital and implement a lockdown imposed last month as the country fights the spread of coronavirus.

The police robot has been deployed to patrol areas of Tunisia's capital, Tunis, to guarantee that individuals are following the rules.

The robot's Tunisian creator Anis Sahbani said the machine was first produced in 2015 to do security watches. It also operates self-sufficiently through artificial intelligence.

The robot, built by Sahbani's Enova Robotics firm, costs $100,000 - $140,000 and has been selling mostly to other countries, to companies for security purposes.

The "robocop", also known as PGuard is remotely operated and equipped with infrared and thermal imaging cameras, in addition to a sound and light alarm system.

If it spies anyone walking in the largely deserted streets, it approaches them and asks why they are out. They must then show their ID and different papers to the robot's camera, so officials controlling it can check them.

Fourteen people died due to the coronavirus and its the second week of the nationwide quarantine to contain the virus.

Officials ordered everyone to stay home not unless people are allowed to go out to buy basic necessities or for medical reasons.

The North African nation presently has 436 people being treated for COVID-19, the respiratory illness caused by a coronavirus.

How does it work?

It is not clear how many of the Tunisian-built surveillance robots, called PGuards, have been conveyed by the interior ministry.

The producer, Enova Robotics, told BBC it was a private issue. It also refused to reveal the price tag.

A four-wheeled PGuard has a thermal imaging camera and Lidar (light detection and ranging) innovation, which works like radar but utilizes light rather than radio waves.

The interior ministry posted a video on Facebook about its futuristic mission to impose limitations not long after the lockdown started. Some welcomed the move, while others said the PGuard moved too slowly to be effective.

Several videos have since appeared on social media showing people being stopped by a PGuard. One of the videos was a man who was asked if he knows there's an ongoing lockdown. He explained that he wanted to buy cigarettes.

The robot replied: "OK buy your tobacco, but be quick and go home."

Situated in the eastern city of Sousse, the company said it was currently planning to deploy another robot in a Tunis hospital to help the coronavirus patients communicate with their family. The firm, which has its base camp in the coastal city of Sousse, also creates a healthcare robot, he said.

It can give a preliminary visual analysis and use its sensors to quantify certain things and another one will soon be working at a hospital in Tunis.

Mr. Farhat said that this would help limit physical contact between medics and patients with coronavirus.

Robotic technology and artificial intelligence are progressively being utilized during these exceptional times as has been seen in China, which has utilized disinfecting robots and thermal camera-equipped drones among different devices to fight coronavirus.