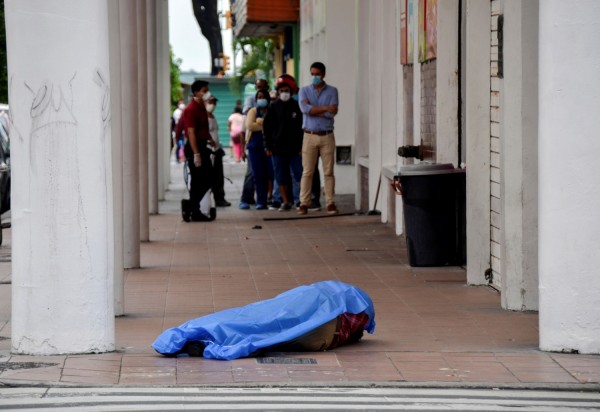 (Photo : REUTERS/Vicente Gaibor del Pino )
SENSITIVE MATERIAL. THIS IMAGE MAY OFFEND OR DISTURB People stand in line outside a shop near the dead body of a man who had collapsed on the sidewalk, during the outbreak of the coronavirus disease (COVID-19), in Guayaquil, Ecuador March 30, 2020.

Streets in the port City of Guayaquil Ecuador have been filled with rotting corpses of COVID-19 victims, as other dead bodies remain unclaimed in the clinics and hospitals after morgues have reached their maximum capacity amid the coronavirus crisis.

According to Los Angeles Times, in the past few days, municipal officials of the city reported that there have been at least 400 bodies that have been recovered in the city with a population of 2.8million people.

Ecuador is currently considered as the virus' epicenter in South America after reporting 3,163 confrimed cases.

While people believe that the majority of the deaths is caused by the coronavirus disease, health authorities in the country are unable to confirm the exact number of death caused by COVID-19 due to the reports of scarcity in testing.

The city's mayor, Cynthia Viteri, who was also reported to have contracted the disease, has firmly stated that it should be the federal government who needs to take the responsibility of collecting the corpses which are already rotting in the streets.

On the other hand, the city's former mayor, Juan Carlos Freire said that a "crisis committee" which is comprised of academic, business and government leaders would be formed in order to tackle the problem regarding the transport and burial of the cadavers that have been accumulating in hospitals and clinics.

Meanwhile, city health officials said that there are at least 1,000 people who come to Guayaquil's largest hospital, Los Ciebos, every day fearing they may have contracted the virus. However, most of the time these are false alarms, the sudden upsurge in the number of people going to the hospital is pushing their resources to the limit.

National Nurses Association of Ecuador has also reported five fatalities across the nation, also adding that there are also 370 nurses who have been infected with the virus amid the efforts to stop its spread.

On Tuesday, Viteri promised that the unclaimed bodies will be stored in three refrigerated cargo containers as they are still working on the plans on building a new cemetery. She also denied reports that the cemetery will be a mass grave and noted that all of those who fell in the mids of the crisis will be given Christian burials.

The country of Ecuador has already declared a state of emergency as they grapple against the COVID-19 pandemic.

On February 29, the country reported its first COVID-19 case, who is a 70-year-old woman who traveled from Italy. The woman has died two weeks after being diagnosed. The number of cases in the country has escalated since then.

Travel restrictions and closure of the country's borders have been placed by the country's President Lenin Moreno. However, the city of Guayaquil was slow to respond to the advice since it mainly relied on its open markets and trading.

The country's health and labor minister Catalina Andramuno has also announced her resignation from her post last week after the cases in the country shot up.