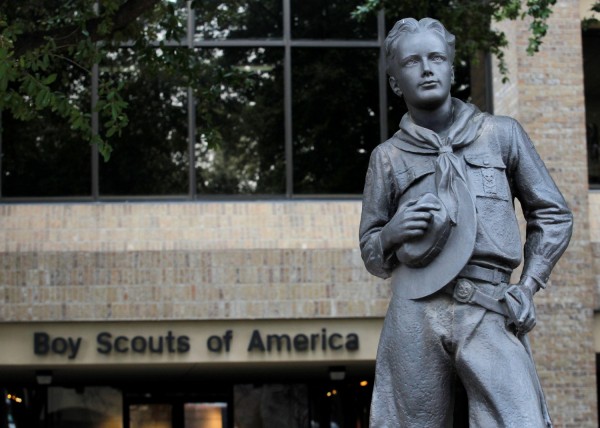 (Photo : REUTERS/Tim Sharp)
FILE PHOTO: The statute of a scout stands in the entrance of the Boy Scouts of America headquarters in Irving, Texas, February 5,2013.

The 110-year old organization urged the victims of the alleged sexual abuses by former scoutmasters and troop leaders to come forward.

The decision of the BSA to resort to Chapter 11 was made with the hopes of surviving a number of sexual abuse lawsuits that was filed against the organization. Most of these cases were made possible by changes in state laws allowing people to sue over sexual abuse that had happened long ago.

Filing for bankruptcy will put the cases filed against the organization on hold for the time being and will allow them to continue operating. However, the Boy Scouts will ultimately need to sell their properties including hiking trails and cam grounds in order to support the victims' fund which can reach more than a billion dollars. The organization have estimated that there can be as much as 5,000 victims who will come forward and seek compensation.

As per CNN the organization released a statement saying that they are encouraging the victims to come forward and file claims as the bankruptcy process is in motion.

One of the victims who came reported an incident was James Kretschmer from Houston, who sued the organization after being molested in the mid 1970s. According to AP news, Kretschmer said in a statement that the organization filing for bankruptcy was such a shame because it is at its core and what it was supposed to be is a beautiful organization overall. However, he added that since anything can be corrupted, if the organization cannot protect the people and the children, then they might as well shut down.

Based on court papers amid the lawsuits, Boy Scout files revealed that there have been more than 12,000 boys which have been abused by more or less 7,800 molesters since the 1920s.

Given the BSA's presence across the 50-States, the bankruptcy filing, once it sets in motion may be one of the biggest and most complex there have ever been. The Scouts have listed assets ranging for $1 billion to $10 billion and liabilities of $500million to $1billion.

According to the organizations president and CEO Roger Mosby, they are outraged that there were times when individuals took advantage of the organizations program and harmed innocent children. He also added that although they cannot undo the abuse that the victims endured, they believe that the process of Chapter 11 will be able to provide the equitable compensation for all the victims while still maintaining the mission and vision of the Boy Scouts.

It can be recalled that until last spring, the BSA insisted that it never allowed a sexual predator to work with the youth, knowingly. However, in May, attorneys of abuse victims were able to identify known sexual perpetrators that were given back their leadership posts. The day after that, the organization acknowledged this truth.