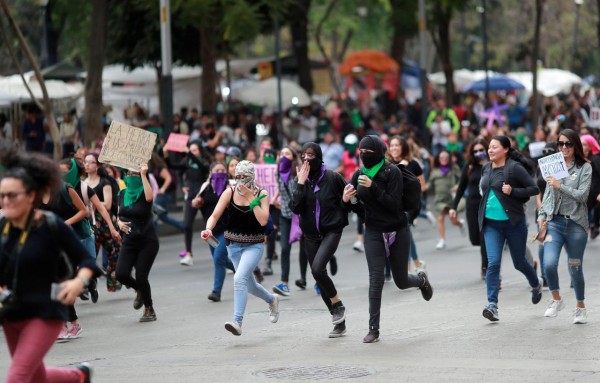 Ingrid Escamilla Vargas, victim of a murder last February 9, where she was skinned, stabbed to death and got her innards removed by her own husband Erik Francesco Robledo, apparently have alerted the cops of her domestic abuse several months before her death.

Per The Sun, the Mexican newspaper Milenio reported that over the past eight years, Escamilla Vargas has filed two complaints against Robledo which included one that was for domestic violence filed just a few months ago.

The 25-year-old woman was murdered by her 46-year-old husband inside the confines of their apartment in Mexico City.

In a footage of the arrest last Sunday which was uploaded by Execsior TV on Yotube, Robledo was in a car with a bandaged head covered in blood while talking to a policeman. In the video, Escamilla Vargas' crazed husband confesses to stabbing the victim following a heated argument. However, he said that he did it after she threatened to stab him first.

In his confession, the murder suspect also admitted to skinning off and eviscerating his wife and then flushing her organs into the sewer.

On February 16, people took it to the streets to march against the rampant cases of femicide in Mexico. The places surrounding the streets where Escamilla Vargas lived in and was murdered at were filled with women chanting their demands for the right to the safe in their own country.

Escamilla Vargas' death outraged the public even more when pictures of her mutilated and skinned body leaked in front pages and tabloid headlines. The march was mainly constituated by women and was escoreted by an all-female police group. Said march began at the Metrobus Station of Gustavo A. Madero and stopped in front of Escamilla's apartment building.

Women within the neighborhood where the victim lived in Vallejo in northern Mexico City are struggling with mixed emotions of sadness, fear and anger as they stood together as a symbol of women's strength and solidarity. They called out how the situations of murders of women because of domestic violence has only worsened overtime.

In the previous years, the number of femicides- or women killed because of their gender has shoot up. In 2018, there were 912 recorded femicides in Mexico, while in 2012 there was a significant change when it rose up to 1,006. As per Mexico's Attorney General Alejandro Gertz, the femicides had an increase of 137% over the course of five year.

The protesters also called out how the legal system of Mexico is quick to overlook and exempt the men guilty for femicides, with the fear that Robledo, Escamilla Vargas' killer will even be set free.

One of the protesters, Nitzi Gonzales, shared to Latin Times that nothing feels safe in their country for women any more. She also noted that they do not know what would happen to their daughters if ever the perpetrator is set free.

With this, the women and people who joined the March called to Mexican President Andrés Manuel López Obrador to take action and do something as the women in their country are murdered almost on a daily basis.